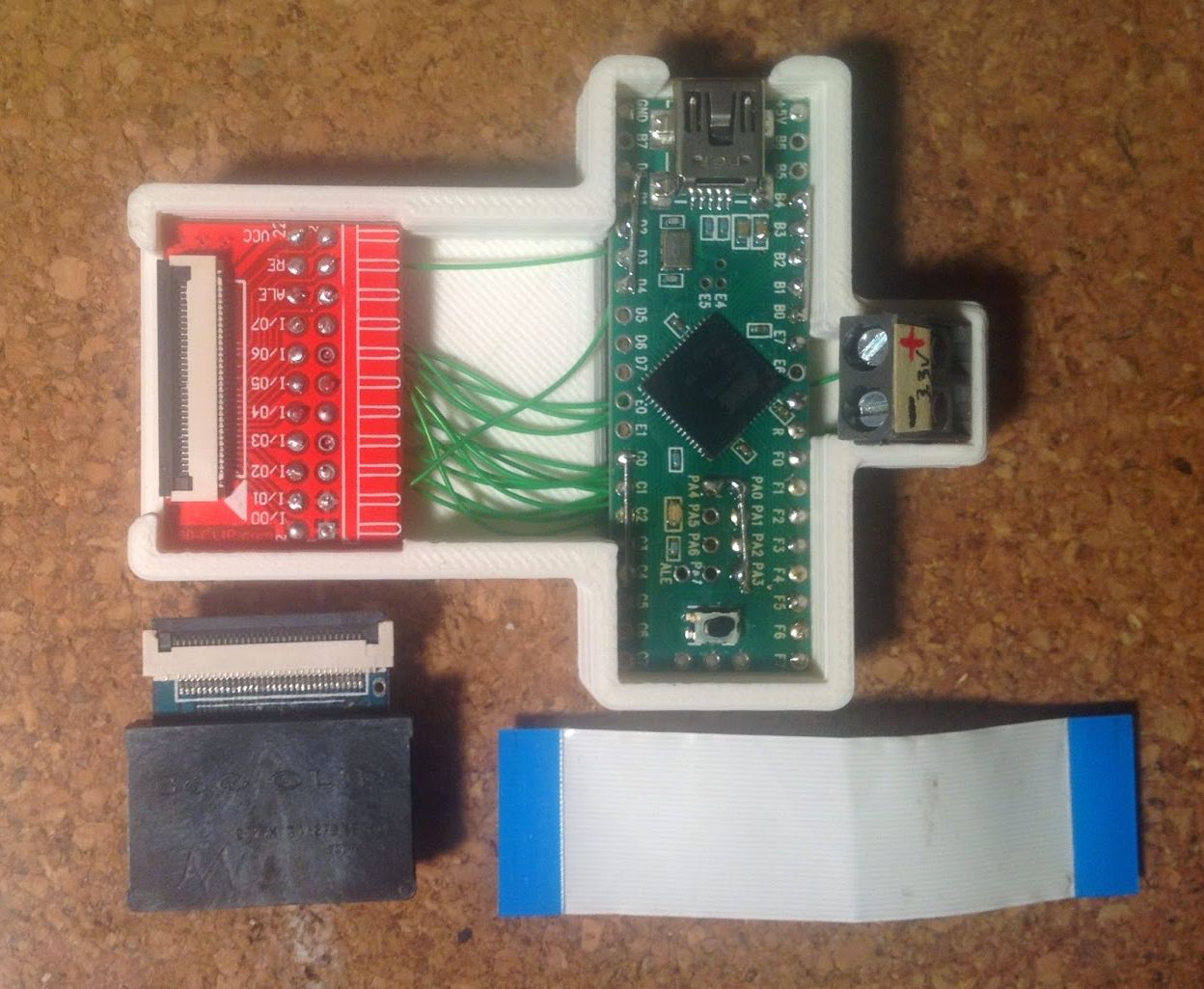 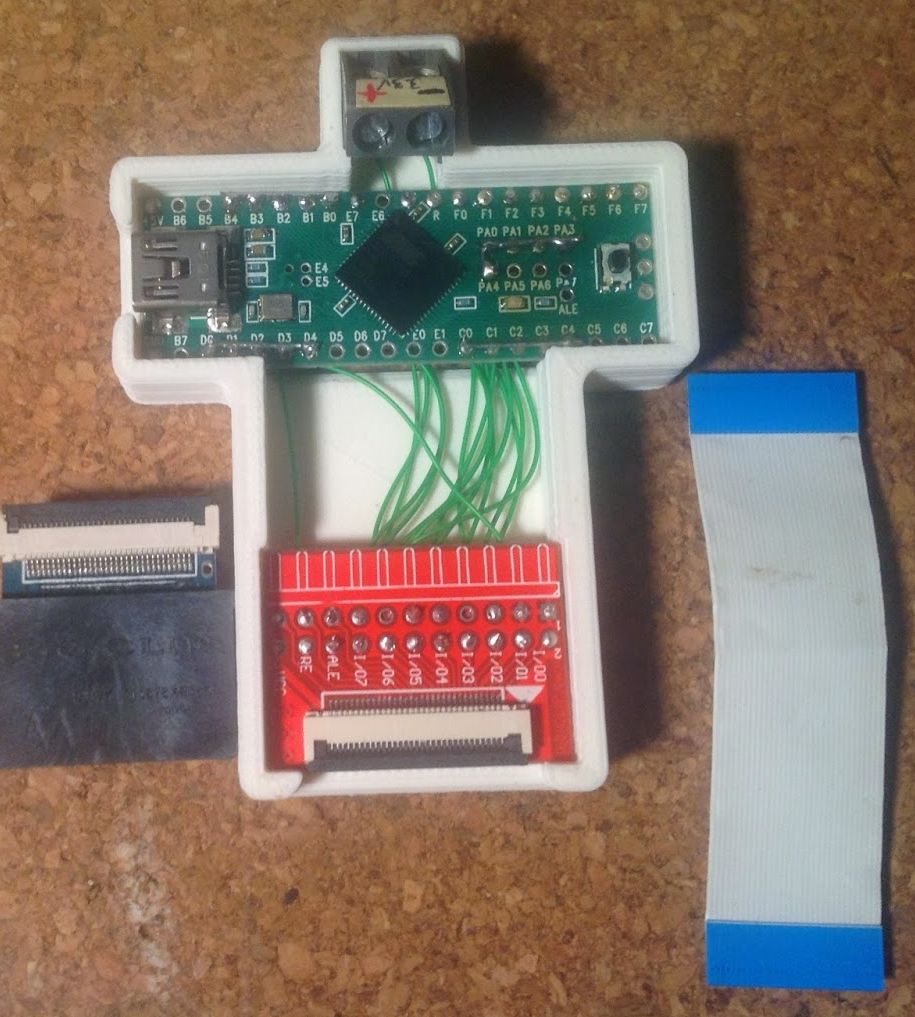 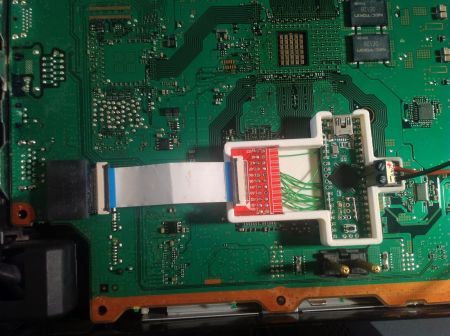 - This is an Old article made on ps3montreal blog. We're only now in production and its August 2016! 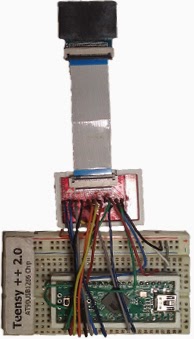 Along with making a fancy case for the teensy and 360 clip pcb, I wanted to make some improvements from my current model. I initially soldered on the pins to install the teensy into a breadboard so I could possibly use it to downgrade NOR consoles with it, but I have yet to use it for that purpose (I have an E3 Flasher for NOR chips). Since they're not necessary, I'll bypass the pins and directly solder the nand clip to the teensy. Also, the shape of the case and orientation of the teensy makes a difference. I've made a rough sketch on some images pulled from PS3DevWiki's comparison of NAND Motherboards. 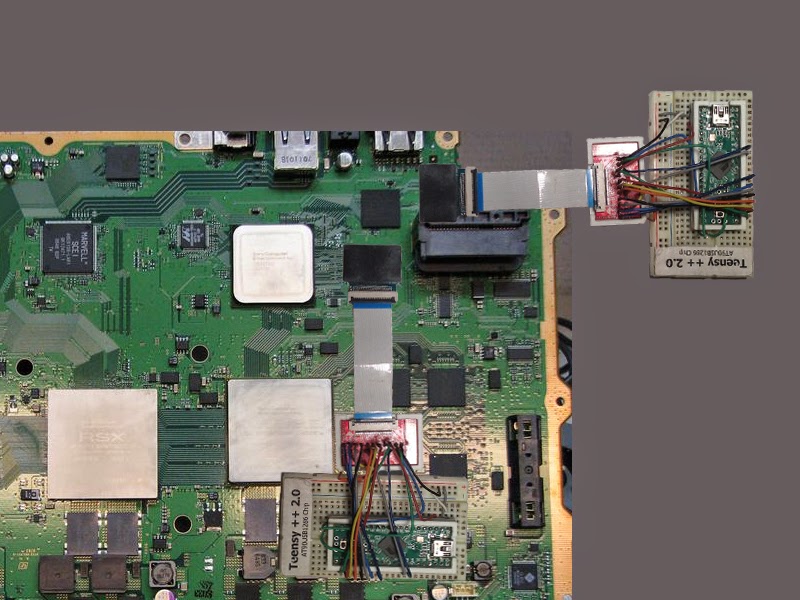 The two images on the left are of the "top" side of COK-002 (CECHC and most CECHE models) and COK-002W (Other CECHEmodels) motherboards. I've overlayed them with an image of my teensy setup in order to demonstrate the clearance around the motherboard. These two boards in particular are a nuisance because there may be residual thermal paste on the edge of the CPU which wipes off on the side or bottom of my teensy. I would like to cut off the excess so that the teensy can sit cleanly around the CPU. 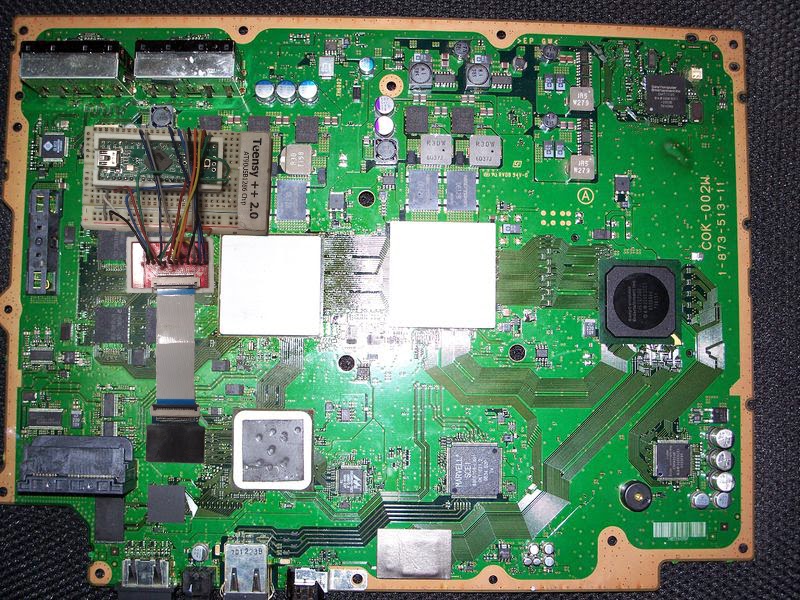 You'll also notice that on the COK-002 board, that both of the nands are on the same side. The other issue with this board is that there is a resistor placed very close to the nand chip, which requires you to cut out a small grove on the nand clip to allow for clearance. The material that the clip is made from is very hard plastic, so you'll need a small tool to carefully grind it, like a dremmel. 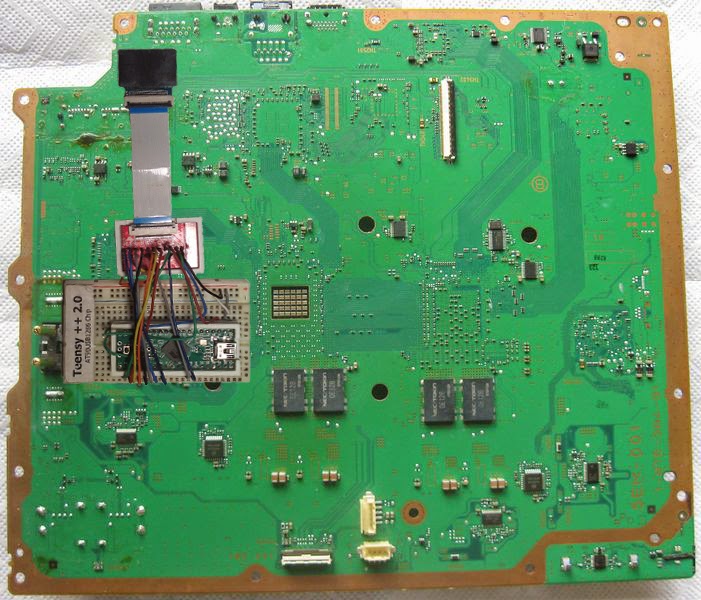 This it the "Bottom" of the SEM-001 (again, CECHG). The pins for the power supply are interfering with the breadboard, thus it always sits on a slant and makes me nervous during a flash or taking dumps. Again, I'll clean up the sides so the case doesn't get in the way of the pins here either. 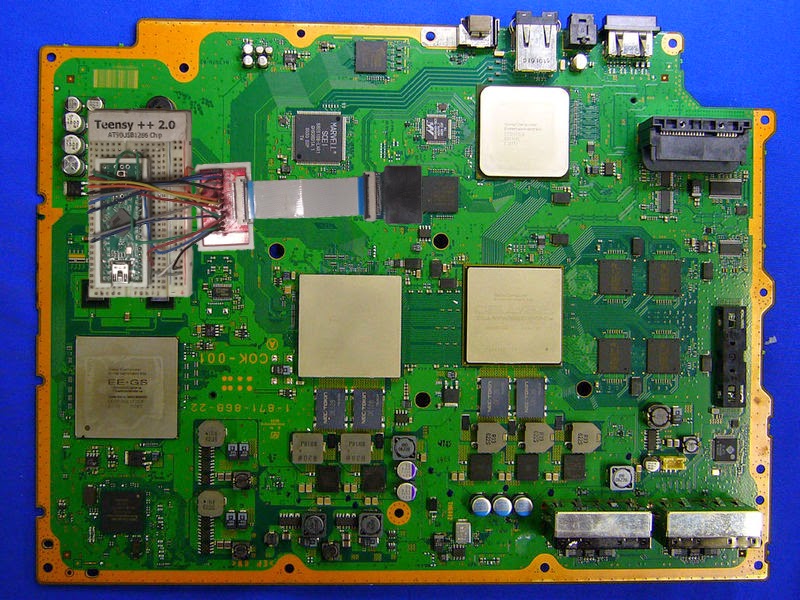 The image on the left is of an COK-001 Motherboard (Model CECHA/CECHB). This board doesn't have much clearance issues, but I'm still keeping it in mind while designing a new layout. 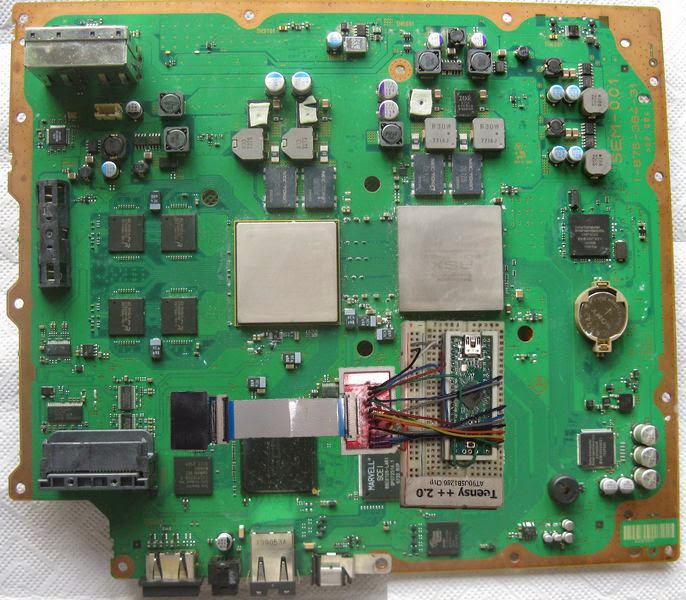 On the right, we have the opposite side othe the SEM-001 (CECHG) mobo. No clearance issues here, however the USB plug is sitting right over the GPU. It wouldn't be an issue if you've taken the time to clean the thermal paste off, but still I would like to have the plug high enough to allow for some clearance. 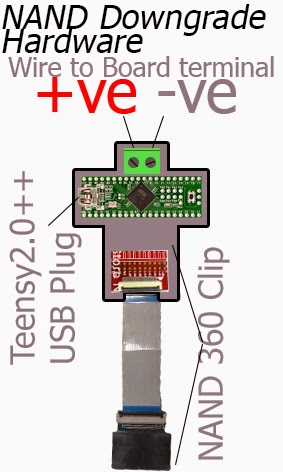 Here is the outline of the final product. You'll see on top that I've included a wire-to-board screw terminal to easily connect to an external PC power supply. I understand that I can power the teensy via USB by adding a chip on the bottom and cutting a trace, the issue with doing that is that the PS3 sinks alot of current while connected to a teensy and the USB may not be enough, resulting in bad reads. I'm keeping the teensy and PCB for the 360 clip in the same orientation but I centered the teensy relative to the 360 clip to reduce bulk on the case. The power terminal is set perpendicular to the USB plug for the teensy, this is to allow the power supply to sit on one side of the mobo and your PC on the adjacent side. 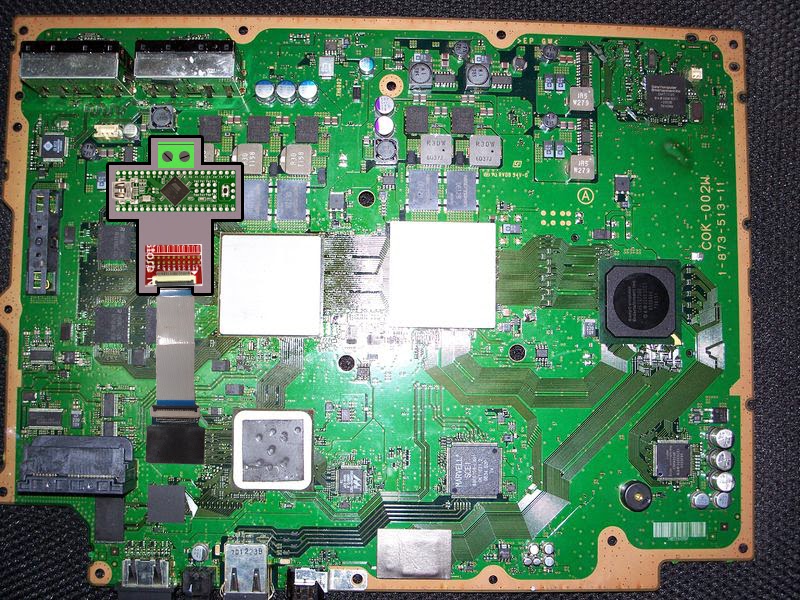 Here is an over lay of what I expect it to look like on a COK-001 Mobo. Good clearance around the CPU, and not too long so the power wires have room to breath. Also, since the teensy is centered it will sit nicely next to the pins on a SEM-001 Mobo, below. 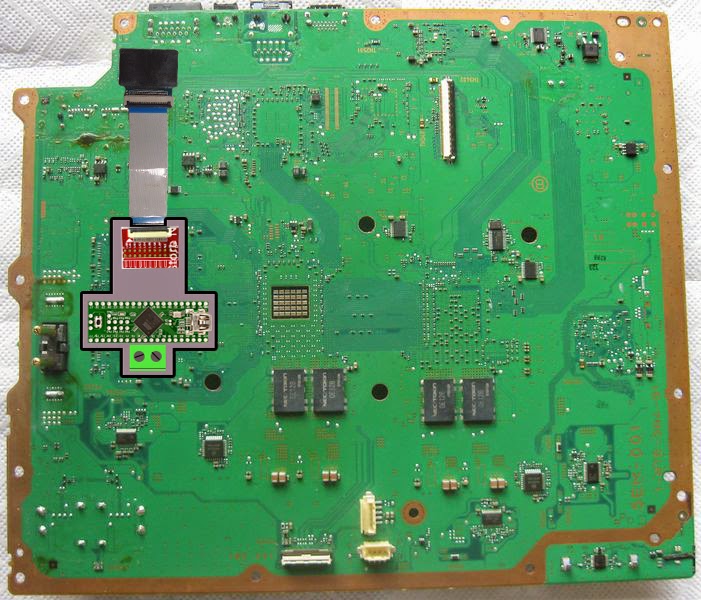